If you browse the selection of guitars either instore or online, you could be forgiven for getting a little confused!  There is a massive range of guitars available, all different prices, sizes, specifications and timbers.  To help you out, we’ve put together a short Acoustic Guitar buyers’ guide.

On this page you will find:

The Importance of a Set-Up

Many guitar shops don’t do any set-up work on their instruments. Some will try to persuade you that it’s not necessary, but in our experience this just isn’t true!

Why? If you pick up most guitars “straight from the box”, you will often find they are uncomfortable to play. In many cases, the strings are a long way from the fretboard, making it hard work to hold them down, and causing a fretted chord to sound out of tune even if the open strings are tuned correctly.

Sometimes the strings are too close to the fingerboard, causing fret-buzz and unwanted rattling noises, and sometimes there are rough fret ends that dig into your fingers. Occasionally there are more serious problems, where a well-trained eye will spot that the guitar is not fit for sale and needs to be returned to the manufacturer.

A good first step is to decide whether you want a guitar fitted with a pickup so that you can play through an acoustic amplifier or PA system. Many players like to plug in their guitar so that they can use effects units, or to play with a band, in a church or just with friends.

It is much cheaper to buy a guitar with a good pickup system fitted when the guitar is made than to fit one afterwards – so now is a good time to think about it!

Most guitars can be categorised as one of 4 basic shapes.

Along with these shapes, there is the added option of having a Cutaway body.

These are very popular on electro-acoustics. A cutaway body gives the player easier access to the highest frets on the guitar.  Guitarists who mainly play electric guitar often prefer acoustic guitars with a cutaway, as do Jazz players.  Some acoustic guitar purists argue that a cutaway diminishes the acoustic quality of a guitar. As always, the acid test is to play the guitar – if you like it, that’s all that matters!
Not all guitars follow these standard shapes. One thing to bear in mind is that, with the more unusual body shapes, it can sometimes be difficult to find a hard case that fits the guitar, unless the manufacturer supplies one.

Some other body shapes include:

First of all, a health warning – don’t let any of the following information override what your eyes and ears tell you about a guitar!  Not every solid top guitar is wonderful, and not every laminate top guitar is bad. Now read on…

Acoustic guitars were designed to be made out of solid woods.  The top of the guitar is normally constructed from a block of quarter sawn timber, which is then split and opened like a book (bookmatched), then glued together to make one piece.

The top is very strong along the grain and very flexible across the grain.  Struts of wood known as the bracing are glued to the underside to add strength, and transmit vibrations from the strings across the grain.  The vibrating top then radiates the sound out from the guitar to the listener.

Solid tops tend to start out with a better tone, but they are still stiff and tight when new. The more they are played the more freely the top vibrates. This has the effect of enhancing the guitar’s tone as it ages

Many budget guitars have laminated tops. The laminate is basically plywood, where the grain of the centre layer (the filling in the sandwich) runs across, while the grain of the front and back run vertically.  Manufacturers use plywood because it is strong and inexpensive.  However, acoustically a laminated top behaves differently to a solid top.  Manufacturers tend to copy the bracing designs developed for solid top guitars, which is not ideal.  The laminate is strong, but stiff, which limits the freedom of the top to resonate.

Also the glue in the laminate has a dampening effect on the tone.  Laminated top guitars can sound ok at lower volumes, but tend to be less articulate when played harder, when they can become a bit muddy and indistinct.  Many players choosing in the store are self-concious and only play quietly, and so don’t necessarily pick up on this. 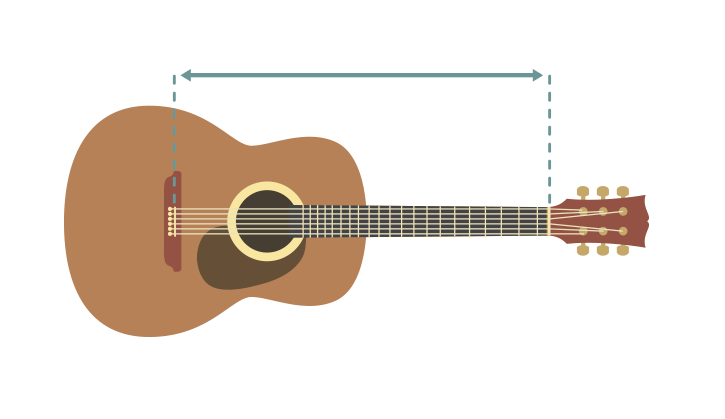 This is the measurement of the sounding length of a guitar string.

Scale lengths vary from approximately 630mm (24.8″) to 650mm (25.6″). The majority of acoustics are at the longer end of the spectrum, although some small bodied instruments and 12 strings tend to be a bit shorter.  The main difference for the player is that a shorter scale length feels “looser” under your figures at the same string gauge.  However, as the strings get looser, there is a trade off with tone quality – so don’t get hung up on this.  Most Martins, Taylors, Lowdens, Collings and other high-end acoustics are long-scale instruments.  That’s good enough for us!

With most modern acoustic guitars, the neck joins the body at the 14th fret, but there are models available with larger sound chambers that join the neck at the 12th fret.

Some experienced fingerstyle players prefer these for their slightly improved resonance and sustain, but the shorter neck prevents access to some of the higher notes, which can make it harder to play solos and some open chords.  Be aware that it can be difficult to find a case that that will fit properly, unless the manufacturers supply one.