You may have come across the term drawn or soldered flute tone holes, and you may be wondering what they are exactly, and what difference they make.

What is the difference between drawn or soldered tone hole?

All flutes have tone holes, they are simply an opening on the body of the instrument with a ‘chimney’ on which the flute keys close. The difference between draw and soldered is in the manufacturing process. 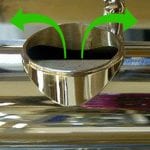 To manufacture a drawn hole, the process starts with the tube. The tone holes are drawn up from the tube material and then rolled at the top.

This is a much quicker and cheaper manufacturing technique vs soldered and you find most flutes from beginner to intermediate flutes have drawn tone holes.

A rolled tone hole has thinner walls than a soldered, simply because the flute tube has been pierced and then then metal drawn up to form the tone hole.

The top of the tone hole is then rolled to form the top, the difficulty, even in this day and age of manufacturing techniques, is getting the top of the hole completely flat.

Unlike soldered you cannot file the top flat, so to get an airtight seal the pad in the key has to be fitted ‘shimmed’ to compensate.

Long before drawn tone holes were possible, a soldered tone hole was the only way to do it. The flute tube has the hole drilled and all the material removed.

The tone holes are all individually manufactured and then soldered to the flute tube. This is a much slower process and more material is used.

A tone hole that has been made separately has no need for a rolled top, as a result it can be made to be perfectly flat. This means the flute pad can be fitted easy and better for a better airtight seal.

Because the soldered tone hole is made individually from separate material, the thickness is consistent unlike drawn tone holes.

Drawn vs Soldered – Does it make a difference to the sound?

A question often asked is which is better, or which produces the better sound. To say one is better would be wrong. Different yes, as they offer different characteristics and it would really be down to the player.

As a general rule, soldered tone holes are used on professional flutes. Because a tone hole has been made individually, they are more consistent than drawn.

This makes more resistance and more depth to the sound and slightly less ‘brilliant’ sounding than drawn. For an advanced player this is the preference as it allows for consistent, and fast playing without overpowering the flute.

A drawn tone hole flute is often much more flexible, you do not quite have the same power but a brighter and more open sound.

As with just about every instrument, there isn’t a definitive answer as to which to choose, or which is better. Simply, it comes down to the individual player and what they want from the flute.