1. Where are cellos made?

Over 300 years ago cellos were developed in Italy.  However, over these three centuries cellos now come from a range of countries including Europe, America and China.  As workshops are built in different parts of the world luthiers travel and learn different skills and bring them back to their home country.  Cellos are often constructed from different components from around the world and often don’t come from just one place.  Germany was recognised as the main builder of cellos over the last century but more cellos are now built in China than before and this is shifting the geography.

A cello bow is very similar to a violin or viola bow but is actually shorter (72-73cm long) and heavier than the counterparts.  A bow is constructed in several parts; a frog, screw, stick, hair and tip.  The stick is commonly made from wood, carbon fibre or fibreglass.  Brazilwood or Pernambuco wood are the traditional woods used – they come from the same tree but Pernambuco makes the higher quality bows.  Fibreglass is often used for student bows as it can be more durable.

The hair on a bow is stretched between the tip of the stick and the frog so that it resembles a ribbon (175-200 hairs).  The hair is either nylon, synthetic or horsehair from the tail of the horse which is the more traditional.  When the bow is pulled across the strings of the cello it vibrates and produces a sound.  The hair on the bow breaks off periodically and when it gets a bit thin a bow can be re-haired.

The frog connects the hair to the stick and is at the top of the bow where the player holds the bow.  The frog can be made from several different materials and the most common is ebony wood.  Frogs can be “decorated” with mother-of-pearl in-lays.

The grip on the bow is a winding around the stick that helps the player to hold the bow without slipping.  It can be thread or a plastic, or leather winding.

Bows require rosin to make the hair sticky which enables the bow to cause friction on the strings and thereby produce the sound.  Rosin is made from the sap of coniferous trees and all string players will carry one for their bows.  Without rosin it can be difficult to get a sound from the strings.

3. What is the clef for cello?

The cello uses the bass clef on the whole but can read from both the tenor and treble clef if the parts of music are higher.

4. What family does the cello belong to?

The cello belongs to the string family.  It is second in line size wise to the double bass.  The viola, violin and harp make up the rest of the string section in a standard symphony orchestra

5. Is it hard to learn to play the cello?

Learning the cello is as easy or hard to learn as any other instrument. The cello is large but comes in different sizes for younger students. As an example, an average 6-year-old would need a quarter size cello. As the child grows he or she would change to a half and then three quarters before moving to a full-size cello. Learning to read the music is the same as for any other instrument and likewise the techniques are parallel to learning other orchestral or non-orchestral instruments. Arguably it could be deemed more expensive to learn as the instrument itself is more expensive than a guitar for example, but hiring a cello from Musical Instrument Hire is always an option until a decision has been made that this is something that is going to be for life and a full-size instrument has come into being.

7. How much does a good cello cost?

There is no exact answer to this question.  A very basic student instrument can be a few hundred pounds, but as with everything in life, you get what you pay for.  An in-expensive instrument can limit a student and give the student such a difficult time that they will give up and presume that they just cannot play very well.  It is worth going to a music shop and asking experts for their advice on different options.  The second-hand market can be a good go-to place but again, you may want to ask for some advice from a teacher.  When hiring a cello from Musical Instrument Hire you will always get a good quality student instrument that is properly set-up and fit for purpose.

A cello is usually made from carved wood although there are modern versions that are made from carbon fibre or aluminium. A traditional cello has a spruce top with maple wood on the back, sides and neck. Willow or poplar are sometimes used for the back and sides.

9. Who invented the cello?

Andrea Amati is credited with inventing the cello in Italy in the early 16th century alongside the violin. The instruments looked and sounded different to their modern counterparts but as with history and evolution we have the cello of today due to the invention many hundreds of years ago.

This is another question that cannot truthfully be answered. The answer will depend on who the cello is for and the budget involved. It is more appropriate to suggest that an inexpensive or imitation cello will not be fit for a student to learn on and should be avoided. There are several brands of cellos from around the world and the instrument needs to be made and set-up correctly to enable the learner to enjoy and progress learning. A cello teacher, or music shop will be able to advise on brands that are within budget and appropriate to the student enquiring.

11. What is the range of notes on the cello?

The cello has a vast range of notes spanning between three and a half octaves and four. There is then the argument that there are harmonics that can be obtained and other clever, technical measures to create notes.

The size of the cello will depend on its actual size, i.e., whether it is full size or not – this is a broad outline but instruments can differ marginally within their own sizes.

13.How much is the most expensive cello in the world?

Cellos are sold through auction houses frequently but the most expensive will be around £20m!

14. What are the parts of the cello called? 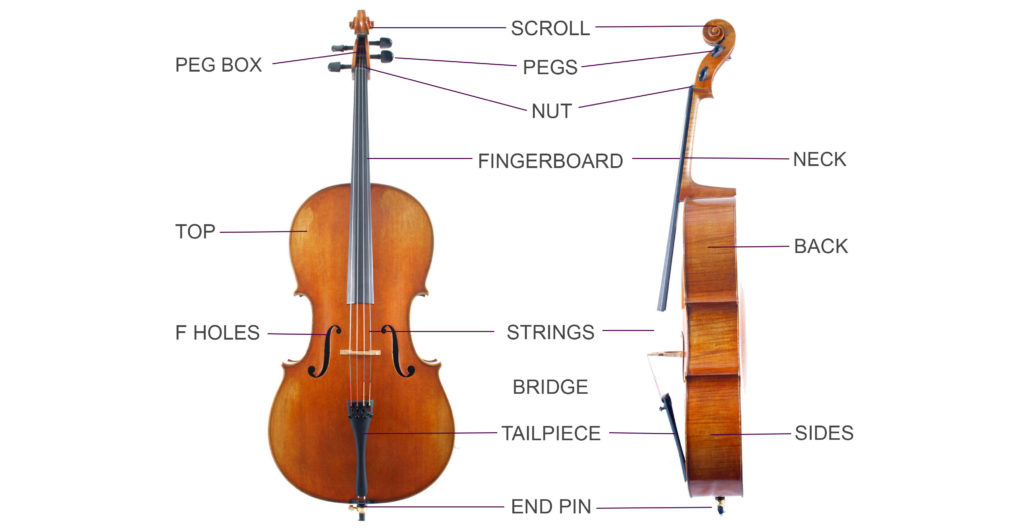 15. How many strings does a cello have and what are they?

A cello has four strings and they are C, G, D and A.  Teachers will frequently make up a rhyme to help students learn their strings.  Auntie Doris Goes Crazy is a common one for cello strings.

16. What is the soundpost on a cello? 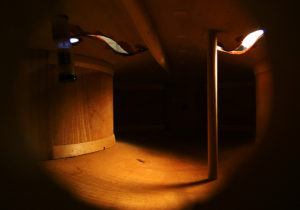 The bridge on a cello is very important as it is the go-between for the strings and the body of the cello.  The bridge enables the sound that the cello produces to be transmitted, and fitted properly enables the best tone to be produced from the cello.  Every cello should have a bridge that is fitted correctly and the correct size for the instrument.  Many cellos have ill-fitting or incorrect bridges and this hinders the progress a student can make.  Professional players will have bridges customised and can be very particular about the bridge on their cello.

Cello strings will need tuning every time a cello is played.  The pegs at the top of the cello can be turned to tune the cello, but more commonly on student instruments there are fine tuners at the bottom of the strings that can be turned to tune the cello.  picture It is good practice that young children are persuaded not to tune their cellos as this can lead to strings snapping which is expensive and can be slightly alarming if they ping off if unexpectedly.  Professional players don’t use fine tuners, they prefer to use the pegs and have very finely tuned ears to be able to tune a cello “by ear”.

19. Who is or was the best cello player in the world?

There have been many famous cellists over the years and the first celebrated cellist is commonly cited as Luigi Boccherini through to today’s new talent of Sheku Kanneh-Mason.

A cello is a non-transposing instrument so is in the key of C.